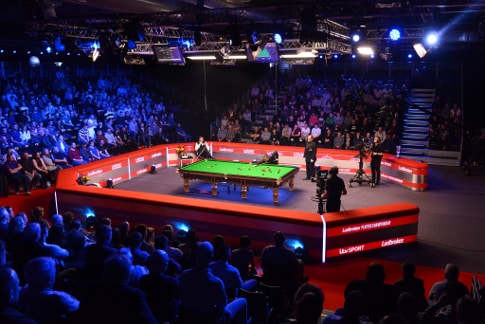 32 of the Worlds best players will fight it out to win the World  Grand Prix and scoop the top prize of £100,000. Read our preview, with the latest betting offers for existing customers, odds and the full tournament schedule.

The World Grand Prix is a relatively new tournament. It was created only in 2015, and a year later became a ranking tournament. It is potentially quite a lucrative tournament for players. There is a total prize fund of £300,000 available, with the winner taking home £100,000.

The top 32 ranked players on the one-year ranking list qualify. The list is based on prize money accumulated over the past 12 months, excluded bonuses. Leading that list with already £425,000 of prize money, and therefore seed number one for the World Grand Prix is Ronnie O’Sullivan.

The draw for the tournament is straightforward and provides the top-seeded players with on paper, the easiest route to the later rounds.  Ronnie O’Sullivan will play the 32nd ranked player Robert Milkins, while the second-ranked player plays the 31st ranked player, and so on.

There are two notable absentees to the tournament this year.  Marco Fu misses through injury, while 2017 winner Barry Hawkins hasn’t done enough over the past 12 months to qualify. He needed to reach at least the final of the Snooker Shoot Out final last week to qualify but failed to do so.

A couple of surprise additions include Michael Georgiou who won the tournament Barry Hawkins needed so much to qualify. He faces Luca Brecel in the opening round.

The matches in the first two rounds consist of 7 frames. This increases as the tournament progress with the winner determined over 19 frames in the final.

The World Grand Prix doesn’t attract the same amount of attention as received by other ranking events. Because it is relatively new, and some of the momentum it had upon launch has diminished a little, bookmakers this year don’t seem to be promoting it much. For instance, Ladbrokes is a sponsor of the tournament but don’t have any offers themselves. See our snooker betting offers page for the latest offers.

How to Watch the World Grand Prix

Full coverage of both the afternoon and evening sessions are available on ITV 4. Coverage starts 15 minutes prior to the start of each session.

Here are the odds for the outright winner of the 2018 World Grand Prix. They’re supplied by Bet 365, and are accurate at time of publishing on day one of the tournament, and are subject to change.