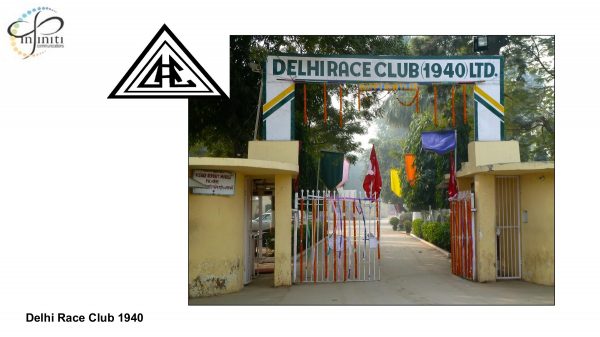 Having been to race meetings in USA, England, Singapore, New Zealand and Australia, never could have prepared me for my hour at the races in India. Namely the “Delhi Race Club”.

Late afternoon my business partner Michael and I were driving back from a late business lunch, when I spied the sign “Delhi Race Club”, then as luck would have it the car park was full.

So two and two made, they must be racing?

Michael did a u turn in the always busy Delhi highway, tooting and finger pointing but not in rage, more what hell are you doing?

After parking the car we made our way to the racetrack entrance, where we were told there were two races left, so we where charged full fare, can’t remember how much now, but certainly not a kings ransom. Plus a race book, and then the start of big differences raised it’s head.

We were asked to hand over our mobile phones, no phones on course.

Behind the guy was a huge collection of used mobile phones, Cash converters would have loved.

Faced with missing the next race if we trekked back to the car to leave them there, we surrendered our phones. And like everything in India we got a wafer thin receipt. (Legacy of British rule, they love paper work).

Then the second scariest thing raised its head or should I say 100s of heads, they were the worlds scariest collection of dogs you are every likely to clap eyes on. Imagine the wolf in Red riding hood and you get the picture. Never been so glad to have been wearing jeans (even though it was 35c plus, still cool compared to the 45c two days later.) April in Delhi is hot.

Keeping one eye on the dogs circling, and the other on the rough ground below, we continued to the bookie ring.

Third scariest thing, the bookies ring, it was a dark shed like area with around 50 bookies, and whiteboard odds board. And only 4 of the 12 horse field with odds next to their names, you couldn’t bet on the other 8 runners.

To be totally honest I can not remember if there was a tote, (way to busy watching the dogs and the fourth scariest thing became very apparent. The fellow punters.

They were so shifty looking, that they would have made superb extras in a pirate movie. Although they were friendly enough to answer the few questions we needed answers for.

Question number one was, where is the racetrack and where are the horses?

Never had to ask those two questions before at the races.

The horse had gone down to the start which is amongst the houses, a mile away.

And the horses then have to pull up in a very small space (nearly need a parachute to stop in time). To avoid hitting the wall at the end of the track, abs breaking on the horses would have been handy.

Luckily my horse didn’t win so I was not faced with taking money of the bookie, that would have been another scary moment.

Michael looked at me, and we both agreed we had seen enough of racing at the “Delhi Race Club”.

We collected our phones on the way out, first thing we checked was if we had any credit left on our phones, I certainly was expecting to see calls to those premium phone services, but the fifth scariest thing did not happen.

All that was left to do was drive back to the hotel, and down a few Kingfishers and plan the next days IPL venture to see the Delhi daredevil s and Chennai’s Super Kings, both featuring great Aussie players.

Next time I will write on what a contrast, the IPL cricket was to the races.

Until next time. Have great experiences.

If you have a great or not so great race experience, please let me know.

In the meantime check out the Royal Routine System tools.